"...14. In 2008, an update of the 1993 SNA will be published as the 1993 SNA, Rev. 1. The extensive
collaborative efforts of national accounts statistics specialists from many countries has led to the
identification of several methodological revisions that will appear in the 1993 SNA, Rev. 1 and that
have been integrated into the methodology in this guide. These new features are:
• Unallocated gold deposits. Deposit claims on gold (as opposed to title claims on physical gold)are classified within Deposits in this guide. This type of deposit is not specifically covered in
the 1993 SNA or the MFSM...." 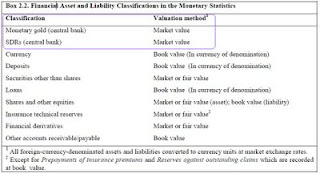 [Mrt: Nice to know that SDR are treated officially the same way as monetary gold.]
...


Chapter 4. Classification of Financial Assets
125. Some countries issue gold coins, which are held for intrinsic value, or commemorative coins, which are held for numismatic value. If not in active circulation, such coins should be classified as nonfinancial assets rather than as financial assets, and within Other accounts payable by the seller/issuer.

126. Central bank or central government holdings of unissued or demonetized currency are recorded as nonfinancial assets in the sectoral balances sheets. Demonetized currency should be removed from the balance sheet upon disposal.

156. This manual recommends that gold loans be treated as off-balance-sheet items (i.e., not recorded as transactions). If the gold is on-sold, however, the on-selling party (i.e., the gold borrower) should record a gold transaction, in like manner to gold swaps. The gold underlying a gold loan is referred to as gold in an allocated account for which an ownership claim on physical gold exists. Gold in an unallocated account, which refers to a gold-denominated claim against a third-party (not the physical gold holder), is classified as a financial asset, specifically as a deposit.

166. Sixth bullet. Should read: “ Valuation adjustment shows the net counterpart to changes in the value of assets and liabilities on the balance sheets of financial corporations, excluding those changes in value (i.e., gains or losses) that are recorded in profit or loss for the period.